McCartney on Tour: Still Worth it? Oh, Yeah!

Posted on July 16, 2017 by beatlefanmagazine

Beatlefan Publisher Bill King saw the July 13 stop of Paul McCartney’s One on One tour at Infinite Energy Arena in Duluth, GA. His thoughts on the evening …

Macca at the magic piano in the Atlanta suburb of Duluth.

Say what you will about Paul McCartney’s mostly unchanging show and his occasionally faltering voice, it’s still a wonder of nature watching him onstage, thoroughly pleasing an audience for nearly three hours with pop music’s most stellar songbook, served up with charm and whimsy to spare.

Admittedly, when I first saw the set list for the current edition of McCartney’s One on One tour, I was a bit underwhelmed, as there was nothing on it that he hadn’t done live somewhere before (though “I Wanna Be Your Man” never had been a regular part of the show before this tour).

Macca has a way of winning over even jaded fans.

But, after the amazing 2-hour-53-minute show by the 75-year-old legend at Infinite Energy Arena in the Atlanta suburb of Duluth had finished, I had the usual big smile on my face — as did every other concertgoer I saw.

Yes, as a hardcore fan I would have loved a somewhat fresher selection of tunes. And it baffles me why he skips over a couple of decades of his career like they didn’t exist. As my friend John Sosebee (who attended the show with me and Leslie) noted, the lack of any “Flowers in the Dirt” songs this time around was particularly surprising, considering that album just recently had gotten the archive reissue treatment. “My Brave Face,” a favorite on the first solo tour back in 1989-90, is a terrific tune that drew acclaim at the time and is in a key Paul easily can handle.

Still, there’s no denying the sheer entertainment power of the numbers presented onstage. Most of the crowd looked like they are probably getting the same Medicare mailers I am, but there also were youngsters who seemed to appreciate what they were seeing and hearing, including the young lady with green hair and a nose ring in front of me, who stood for most of the show.

The set list was heavy on Beatles, as usual.

It was a great concert, and his voice was surprisingly good, only a bit shaky on a few numbers and never to the point where it really detracted.

The set list was the same as opening night of this tour in Miami: 24 Beatles songs, six Wings songs, seven solo songs (three of which were from the “New” album), one Quarrymen song, and the tune he did with Kanye and Rihanna.

It was an evening with a lot of musical high points.

Among my favorite numbers were “In Spite of All the Danger,” featuring a nifty acoustic guitar solo by Paul; and “I Wanna Be Your Man,” which is done closer to the Beatles arrangement than in 1993 (and featured an entertaining story about Mick and Keith of the Rolling Stones, who were given the song to record).

Also a high point for me, surprisingly, was Macca’s George Harrison tribute, “Something,” which I’ve seen him do quite a few times. Atlanta Journal-Constitution music columnist Melissa Ruggieri got it exactly right in her review when she wrote: “There might not be a more beautiful sonic live experience than the moment ‘Something’ shifts from McCartney on ukulele to the full band kicking in like an exploding rainbow. It’s a moment worth revisiting a hundred times.”

John agreed that “Something” has only gotten better over the years. He also really enjoyed the mid-show acoustic set. For some reason, he said, “‘You Won’t See Me’ got to me emotionally, which has never happened to me in any concert I have ever attended.”

John also thought “Love Me Do” was fantastic, with “Wix playing the harmonica perfectly,” and loved the one-two rocking punch of “Sgt. Pepper’s” going into “Hi, Hi, Hi” in the encore, saying those numbers had him “singing at the top of my voice, on my feet. The kids sitting next to me were looking at me in amazement, watching a 62-year-old old man rocking.” 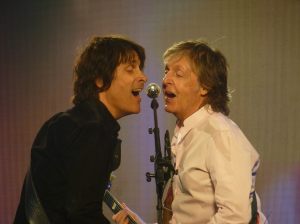 Sharing the mic with Rusty Anderson.

Leslie is a fan of the upbeat rockers, and particularly liked the latter part of the main set starting with “Band on the Run.” She’s also a big fan of “Let It Be.”

Quibbles? Again, I would have loved to have heard some songs never previously done live in place of, say, the holdovers from “New.” And, as John said, now that I’ve seen “Temporary Secretary,” I don’t need to see it again. It largely was lost on the crowd.

Leslie also said she wouldn’t mind not hearing “Hey Jude” again, but, let’s face it, that’s never leaving the set list, because these shows draw a lot of first-timers or folks who haven’t seen him since Wings, and they expect the classics. The same goes for “Let Me Roll It,” which John said he wouldn’t mind never hearing live again.

As for “Maybe I’m Amazed,” it also falls into the expected-classic category and it’s his “for Linda” song (which is why it also made Leslie’s highlight list from the evening), but there’s no denying it’s not well-suited to his vocal range any more. Many fans would hate it if he ever dropped that tune, but there are other Linda songs he could sing. Unfortunately, “My Valentine” is pretty much it for a “Nancy song,” so I think we’re stuck with it — unless he writes a new one.

The bottom line: A lot of my friends who aren’t hardcore fans went to this concert, and they were raving afterward on Facebook about what a wonderful set list it was. So, it’s a balancing act that seems to work for Macca.

The Duluth show also excelled in the nonmusical aspects. Fans got a kick out of the local authorities renaming a road behind the arena Paul McCartney Boulevard, and the freshened production effects were top-notch, with the pyrotechnics bigger than ever — though the smoke lingered for the rest of the evening in the 11,500-seat arena, reportedly the smallest Macca is playing on this leg of the tour. (His usual Atlanta venue, Philips Arena downtown, is undergoing renovations, and the new Mercedes-Benz Stadium, which he was interested in opening, wasn’t ready in time for this summer’s tour schedule.) 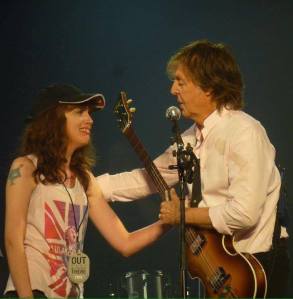 The band — Abe Laboriel Jr., Brian Ray, Rusty Anderson and Paul “Wix” Wickens — seemed just as thrilled to be playing with Macca as when they first hit the road with him 15 years ago.

And Paul’s stage patter may rely on tried-and-true stories for the most part, but his interaction with the audience has gotten warmer and more quick-witted over the years.

Speaking of that interaction, we didn’t just get one fan invited onstage, but a host of them, including a family of four from Bowling Green, KY, wearing Sgt. Pepper costumes. Paul let the young boy strum his bass.

But, the show was stolen by a young woman named Becka Phillips from North Carolina, who was brought onstage before the family. She had a sign that Paul had read out loud earlier in the evening asking, “Plz help me tell my family I’m gay!” Paul asked her if her family was in the arena, and she said her dad was.

Paul turned to the crowd and, with a grin, said, “Hey Dad … She’s gay!” Paul also told her, “Good on ya comin’ out like that,” gave her a hug and then, as requested, signed her upper chest.

Another hug from Macca.

By this point, the young lady was in tears and, like a father, Paul pulled her close and gave her another hug. A sweet moment that she later said on Facebook was “everything I thought it would be and more.”

So, yes, the One on One stop in Duluth was another wonderful evening with Sir Paul.

Each time he goes out on the road now, I hear from fans wondering if this will be the last time. Again, I think Melissa Ruggieri hit the nail on the head when she wrote: “McCartney loves music too much to ever declare a farewell outing, and, between his apparent stamina and the sturdiness of his band, he just might stay on an endless tour.”

She added: “Trust us, no one would complain.”

Certainly not the audience in Duluth!

Photos by Rick Glover (who was seeing his 149th McCartney show). Look for more tour coverage (and more photos) in Beatlefan #227 in August!

10 Responses to McCartney on Tour: Still Worth it? Oh, Yeah!