Not much can top hearing ‘Mr. Blue Sky’ in concert

Posted on July 7, 2019 by beatlefanmagazine

There might not have been a Beatle onstage at State Farm Arena, but Bill King reports there was a definite Fab aura surrounding the Atlanta performance by Jeff Lynne’s ELO. …

When it comes to fellow travelers of The Beatles, not many have racked up as much mileage as Jeff Lynne.

His work with Electric Light Orchestra obviously was inspired by the latter-day Beatles, to the point where John Lennon once referred to ELO as “sons of The Beatles.”

And, Lynne’s work with ELO led to a set of impeccable Fab Four bona fides: He went on to produce George Harrison’s “Cloud Nine” album and associated tracks, and Lynne joined George in the superstar band known as the Traveling Wilburys. He also ended up producing recordings for Paul McCartney and Ringo Starr, and was producer of The Beatles’ reunion tracks, “Free As a Bird” and “Real Love” in the mid-1990s.

After Harrison’s death, Lynne joined George’s son Dhani (pronounced “Danny”) in finishing off the posthumous “Brainwashed” album. So, it wasn’t a surprise earlier this year when it was announced that Dhani would be the opening act on the 2019 tour by what’s now known as Jeff Lynne’s ELO.

The tour hit Atlanta’s State Farm Arena July 5, and, even before any of the musicians took the stage, Lynne’s impressive résumé as a producer was highlighted by the PA playing some of the songs he’s overseen, including tracks by Tom Petty (“I Won’t Back Down” and “Learning to Fly,” both of which Jeff co-wrote), Roy Orbison, Harrison (“When We Was Fab”) and even The Beatles’ “Free As a Bird.”

The concert was Lynne’s first in the city since a show by the original Electric Light Orchestra in 1981 that I reviewed for The Atlanta Journal-Constitution. The 2019 version lived up to the original and was, as my friend Melissa Ruggieri said in her AJC review, a sonic feast.

First up was a 40-minute opening set of psychedelic rock from Dhani, George’s look-alike/sound-alike son. It was intense guitar-and-synthesizer-driven rock. While most of the music (aside from Dhani’s vocals) didn’t bring his father’s work to mind, the best tune, “All About Waiting,” from his 2017 album “In Parallel,” definitely showed some George influence.

Then came an hour and 45 minutes of ELO. (As Leslie noted, a regular-length concert like this makes you appreciate all the more how unusual McCartney’s nearly 3-hour performances are!) 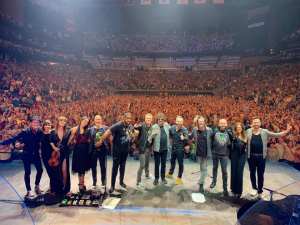 An ELO selfie taken at the end of the regular set. (Photo: Jeff Lynne’s ELO)

The current incarnation of ELO boasts a baker’s dozen of musicians, including two cellists, a violinist and two backing singers. The 71-year-old Lynne, who hasn’t changed his look in decades, handled most of the lead vocals, though he swapped off the lead with singer-guitarist Iain Hornal on a couple of numbers, and Melanie Lewis-McDonald handled the female solos.

They did a great job reproducing the dense ELO orchestral-rock sound onstage — from the ever-present strings to the keyboards, guitars (Lynne even took the occasional turn playing lead) and those trademark backing harmonies. It all was supplemented by elaborate video effects behind them, screens on either side highlighting the action onstage, and enough light-and-laser effects to make you think you’d flashed back to the 1970s.

The 20-song set, which opened with “Standin’ in the Rain,” mixed smash-hit singles with album tracks. The numbers ranged from “10538 Overture,” from Electric Light Orchestra’s 1972 debut, to “When I Was a Boy” from 2015’s “Alone in the Universe,” and even included “Xanadu,” the movie song Lynne produced for Olivia Newton-John in 1980.

It really brings home the phenomenal number of hits Lynne has had over his career when you hear them performed one after another. High points included “Evil Woman,” “All Over the World,” “Do Ya” and “Livin’ Thing,” which featured violinist Jessie Murphy down front for the distinctive opening solo.

A particular treat was when Lynne (who doesn’t talk much) introduced a song from “my other band” (the Wilburys) and Dhani came out to sing his father’s part on “Handle With Care” (with Hornal handling the Orbison parts).

The entire evening was richly entertaining, but the closing portion of the show rivaled McCartney’s concerts for sheer musical star power: “Sweet Talkin’ Woman” (Leslie’s favorite), “Telephone Line,” “Don’t Bring Me Down,” “Turn to Stone” and (my favorite) “Mr. Blue Sky,” followed by an extended encore of “Roll Over Beethoven.”

I don’t know about you, but I can’t think of a better non-Beatle treat than seeing “Mr. Blue Sky” done live in concert!

All in all, a Fab evening of music.

4 Responses to Not much can top hearing ‘Mr. Blue Sky’ in concert