Posted on February 18, 2019 by beatlefanmagazine

Beatlefan reader Connie Colvin looks back 55 years at her first reaction to The Beatles.

You might say that The Beatles snuck up on me, stealthily, to steal my heart.

I do remember seeing the little film of them on Jack Paar, but, it didn’t affect me … yet. I was 12 going on 13, then, and I heard more about them at school: This group called The Beatles were coming to the USA to be on “The Ed Sullivan Show.”

Connie Colvin, wearing a Beatles button, with her mom in April, 1964.

First, I was curious, then became more interested. In the paper that my dear mom, Helen, used to get, they had the worst ever photo of them with an article. Things started to heat up.

More and more, my fascination grew. I kept the paper by my side. Then, it was so curious, I got my blackboard and, for the first time, I wrote those magical names, John Lennon, Paul McCartney, George Harrison, and Ringo Starr. Just so I would know who they were, I said to myself.

Little did I know …

The Saturday before the Sullivan show, I took this little red and gold transistor radio out of the headboard of my bed, where it had been unused after my mom had given it to me for some event I can’t recall. I stuck some batteries in it, and just started dialing around, not knowing any stations. I hadn’t been into music at all. Boy, would I learn. They would be my teachers.

So, suddenly, I heard it, “I Want to Hold Your Hand.” It struck me like lightning! Wow, it was incredible! This was The Beatles; it was a clarion call, a revelation!

Then, I came upon “She Loves You.” My mind was blown.

I kept listening for them; the stations WABeatleC and WINS, with Murray the K, would become known to me. I was being drawn inexorably out of the darkness into the Beatles light.

On “The Ed Sullivan Show.”

Sunday, Feb. 9, seemed agonizing, waiting for the Sullivan show. Little did I know what was building inside of me. Waiting, I watched “My Favorite Martian,” a cute show I liked, but it seemed to last a year.

Then … Ed Sullivan came on, finally. He gave his famous introduction, the four young men from England, “Here they are, The Beatles!!!”

It was a thermonuclear explosion inside my brain and heart, with a half-life of 500 years! I fell in love with adorable Paul; gorgeous George; handsome, formidable John (“Sorry girls, he’s married”); sweet, lovable Ringo; and I fell in love with their sublime music, those divine songs with the glowing harmonies opening up all of music to me! I was crying.

Just wow! It was an epiphany, one of the biggest, most overpowering events in my life.

Each of them had their own appeal, but I loved it when they lifted the camera up and it focused on Ringo! I loved him then, and now. 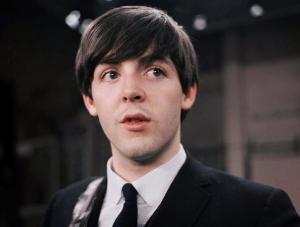 Paul on the Sullivan show.

They changed me in ways that affect me to this day. I wasn’t alone; 73 million tuned in that day, including Billy Joel and Bruce Springsteen, who wrote powerfully about it in his great autobiography. Like them, a lot of others watching decided, “I must make rock ’n’ roll.” And many young girls, like me, were just swept away.

It was March 4 and, on my 13th birthday, Mom gifted me with my first little record player, and my first album, “Meet The Beatles!” It was the opening to my lifelong passion and musical education.

The Beatles gave that and so much more to me and the world. There has never been, before or since, a musical and cultural explosion like them. There never will be. Fifty-five years since they came out and they are still present, even with the untimely and tragic deaths of John and George. I predict their power will last 50 years from now, because their music is valid and timeless. 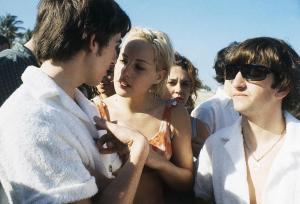 George and Ringo in Miami Beach, during The Beatles’ first U.S. visit.

They also turned out to be intelligent, funny, amazing guys, with wonderful senses of humor, and so much more.

It is my theory that they could not fail, as they each had an important element of life: John was fire, strong, not suffering fools gladly, his music full of passion and fire; Paul was air, the romantic, “Yesterday,” soft with silly love songs, a bit lighter, the natural showman; George was water, the quieter mystic, the spiritual searcher, the Pisces, as am I; and dear Ringo was earth, the down to earth, funny, hail fellow well met guy. They had it all, and they stole my heart and conquered the world.

I feel so fortunate to have been graced with their magic, their power. They are part of my DNA now, they inhabit my bloodstream and heart. Only two other artists ever have gotten close, Bruce Springsteen and Elton John.

But, there is The Beatles, and then everyone else.

I will love them eternally. Blessings to Sir Paul and Sir Richard; I hope for long lives for them. Thanks, guys, for everything.