A Big Day in the Big Apple and the Beatleworld

Posted on September 11, 2018 by beatlefanmagazine

McCartney’s latest album is available on LP as well as CD and digital formats.

Friday, Sept. 7, was quite a day for Beatles fans, especially in New York, with the release of Paul McCartney’s new album, “Egypt Station”; the ceremonial unveiling of the John Lennon U.S. Postal Service Forever stamp at the Central Park bandshell in the morning; and Macca’s “surprise” concert at Grand Central Terminal that evening.

The Lennon stamp, unveiled in New York City, is part of the USPS Forever series.

Having the Lennon stamp dedication at the bandshell made perfect sense. It’s just down the hill from Strawberry Field and, by extension, the Dakota. In the fall of 1974, Lennon cavorted for film cameras at the bandshell for the original “Whatever Gets You Thru the Night” promo video (footage now officially in the “Mind Games” video, which was shown at the stamp ceremony).

And, on the Sunday afternoon after Lennon’s murder, the bandshell was the central point for the worldwide silent vigil for John. 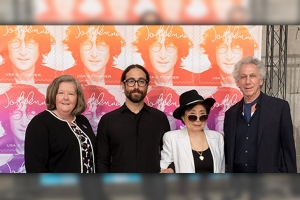 The ceremony was notable for rare public speaking appearances by Sean Lennon and his now-very-senior mother, Yoko Ono, as well as veteran photographer Bob Gruen, who took the photo for the “Walls and Bridges” album used for the stamp. And, emcee Dennis Elsas announced at the ceremony’s conclusion that USPS trucks at the back of the bandshell area would have the stamps available for sale, which was not the case at many post offices around the country.

As for the two McCartney “events,” a couple of takeaways:

First, having just passed the 25th anniversary of Billy Joel’s last album of new material, and with Elton John commencing a long farewell tour and Paul Simon releasing an album of reimaginings of some of his older songs as he prepares for his retirement from public performance, it’s so nice to see Macca release an album that shows he’s still really trying. 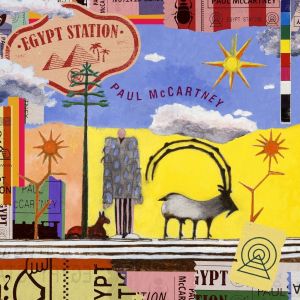 Then, there was Friday night’s show at Grand Central, which was livestreamed on McCartney’s YouTube channel.

A lot of fans still look at Macca through the lens of Beatle Paul from 1964, or the leader of Wings on one of the 1970s’ biggest tours. In both cases, that’s a long time ago. 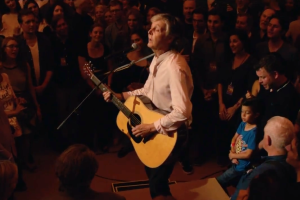 The fact is, the man is 76 years old. He uses a teleprompter and, after a week of talking to various media to promote “Egypt Station” — and in a space not really made for rock music performances — his voice turned ragged fairly early in the hour-and-40-minutes concert. On social media, people were expressing shock and heartbreak at this.

Again, he’s 76. Remember what Frank Sinatra sounded like when he was 76? And he wasn’t playing a variety of instruments (I counted five different ones that Paul played that night, and that didn’t even count the bullhorn!).

At a time when Elton and Simon are leaving the stage, or preparing to, and Joel is content to continue playing the oldies at his arena and stadium shows (he was at Wrigley Field in Chicago even as Macca was onstage at Grand Central) rather than write or record new material, McCartney should be given props for staying in the game.

He is still recording albums that show, at the very least, he’s trying.

And, he’s playing concerts around the world that entertain the most generationally diverse audience in the pop music business.

If his vocal instrument is showing some wear and tear, well, that is what happens as we reach a certain age.