Ringo’s Back Beat: You Can’t Lose It

Posted on December 23, 2017 by beatlefanmagazine

Ringo Starr and his All Starr Band on their 2017 tour. (All photos by Dave Persails)

Ringo Starr recently finished a concert tour of the U.S., and he made a stop in greater Houston, in Sugarland, Texas, to be precise. With no real surprises, the show was very much the same show we’ve seen for the past six years.

We did get an excellent and welcome return of a rocking “Back Off Boogaloo,” complete with a riff from “Helter Skelter.” Disappointingly, however, the new album track “Give More Love” was no longer on the set list, as it once was for the earlier Vegas shows. Ringo dutifully puts out a new album every couple of years, and it almost seems that, whether it sells or not is beside the point.

Of late, there appears to be a new appreciation for Ringo.

Beyond that, what else is there to say about Ringo Starr? Plenty, it seems, if you pay any attention to what authors and musicians have been saying in recent years.

In some older Beatles biographies, Ringo was hardly mentioned. Whereas there are countless books on The Beatles as a group, plus many on John Lennon and Paul McCartney as solo artists, and even a few for quiet Beatle George Harrison, the number of books devoted to The Beatles’ drummer can be counted on one hand. Not until 1991 did anyone see fit to write one, when Alan Clayson gave us his “Straight Man or Joker?” Even the title raised doubt — still — as to whether Mr. Starkey should be taken seriously.

Of late, there seems to be a new appreciation for our favorite drummer. Michael Seth Starr issued his biography in 2015, and, in 2016, Alex Cain and Terry McCusker explored “the percussive elements” of Ringo’s work with The Beatles. Due in 2018 is a fresh telling from fellow Liverpudlian David Bedford, as to how Ringo joined the group.

This recent attention is no doubt due, at least in part, to Ringo’s 2015 induction into the Rock and Roll Hall of Fame as a solo artist. That honor took place with more than a little help from his friend Paul, but it was also then that so many other famous drummers paid their respects. Dave Grohl said, “Ringo was the king of feel.” Jim Keltner called him “a song drummer.” And, Max Weinberg observed, “four drums, that’s all Ringo Starr needed.” They all, at one time or another, answered the musical question, “What would Ringo do?” Such is the power of his influence.

The Beatles and company also seem to have realized the importance of recognizing Ringo. In the recent 50th anniversary “Sgt. Pepper” release, the drums are mixed to the fore, a fact that has the drummer rather pleased. “Now my drums are back, the overdubs and things lost them originally,” he said. “Now they are back. I’m so happy to hear it the way we did it.”

Ringo seems to love backing up his fellow All Starrs.

If one digs deep enough, there is evidence that Starr always has been at the center of things. Lennon told David Scheff in 1980 that “Ringo was a star in his own right in Liverpool before we even met. He was a professional drummer who sang and performed and had ‘Ringo Starr-Time’ and he was in one of the top groups in Britain, but especially in Liverpool before we even had a drummer.” His old bass drum was boldly emblazoned with the words “Ringo Starr” — not the name of the group he was in — right up to the time he joined The Beatles. McCartney recalled Ringo’s first sit-in with the band as “the moment, that was the beginning, really, of The Beatles.”

In so many ways, Ringo was the heart of The Beatles, especially in the U.S. in 1964. Then, the Saturday Evening Post called Ringo “the most popular of The Beatles in America,” adding, “he evokes paroxysms of teenage shrieks everywhere by a mere turn of his head, a motion which sends his brown spaniel hair flying. When he flips his wig, the kids flip theirs. ‘Riiinngo! Riinngo!’ the kids call out.”

Throughout The Beatles’ career, Ringo often was on top, if not out front. Americans were introduced to him as he sat upon the tall drum riser on “The Ed Sullivan Show,” shaking his head, with that big, happy smile. This drummer was not one to hide in the back, as so many did. There was even a ridiculous “Ringo for President” campaign, an exhibition of his popularity, here. Then there was the Beatles cartoon series, where Ringo’s character was usually at the center of the story (if not the butt of the joke), and always in every sing-along feature. He had central roles in The Beatles’ films, too, most famously in “A Hard Day’s Night” and “Help!” He forever will be associated with “Yellow Submarine,” both the film and the song. 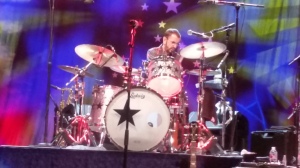 Many famous drummers have cited Ringo as an influence.

From The Beatles’ heyday, consider how many songs are defined by his unique drumming style: “Ticket to Ride,” “Tomorrow Never Knows,” “A Day in the Life,” “Come Together.” The list goes on. In the early concerts (see the Washington Coliseum film, for example) witness Ringo bashing the drums like he was driving a boat through a storm called Beatlemania. He’s all over the place!

Yet, in the studio, despite what initial misgivings producer George Martin may have had, Ringo proved to be THE drummer that every great Lennon-McCartney song needed. On percussion, he could be subtle (“And I Love Her”), raucous (“She Loves You”), and … where the hell did that come from? (“Strawberry Fields Forever,” “Rain”).

So, what about Ringo Starr, now? Though they are very different bands, as George Harrison was with his Wilburys, Ringo is with his All Starrs. There is no doubt that Ringo is the leader, but he’s quite happy to take a back seat and, for much of the show, quite literally. Ringo as the front man and vocalist for some of his own songs is a good showcase. He’s learned over the years to be that leader. He’s more comfortable than he was in the past, but it’s very clear watching him up top on his drum riser — that’s where he’s most comfortable. That’s where Ringo’s star shines.

When the All Starr Band finishes Gregg Rollie’s “Oye Como Va,” Ringo clicks his drum sticks together to pay tribute to a performance well done. When Richard Page displays those smooth vocals on his own songs, again Ringo makes note. When Steve Lukather tears through a blistering solo, Ringo offers a nod. He’s having fun as much as they are. 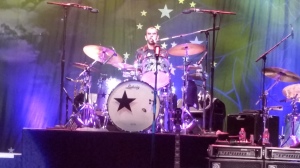 Beatles fans should take advantage of Ringo’s continued touring and catch one of his shows.

The band members all take great care to pay tribute to Ringo when their turn in the show comes up. So it is that Ringo becomes “the legendary one” or the “greatest drummer ever” or “the guy we all came to see” and that all the other band members are all too happy to be playing with and honored to do so.

In this band, Ringo is in his element. Playing on the stage is what he likes to do, and the crowd couldn’t be happier to be a part of it, no matter whose hits are being played.

Should Ringo Starr get more recognition, and more press? Maybe. But, even Ringo is not so keen to write a bona fide autobiography. He seems content to let out just enough bits of info in his books of postcards and photos. He reveals just a little in his somewhat autobiographical song lyrics, too. As usual, he lets his music do most of the talking. He is not known for doing drum solos — so much so, that everyone knows the one very famous solo he actually did, and we know it by heart.

No, if you asked him, he would say what he likes best about his own drumming are his accidental fills. Fills, he says, that he could never play the same way twice. Ringo is arguably a very humble and modest drummer, for someone who claimed drumming as his madness.

Now, the fourth Beatle, the man some had been written off as a fourth-rate Beatle, is flying first class. With news coming of a new All Starr lineup, we all should be sure to catch his show while we still can.