Macca in the Desert: What a Trip!

Posted on October 23, 2016 by beatlefanmagazine 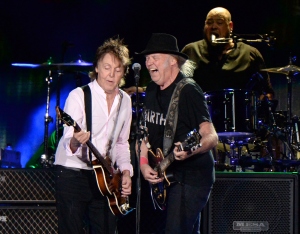 Paul McCartney must have some very big hands, to be able to hold 75,000 people in his palm at once.

After the previous night’s performance by Bob Dylan and a blistering set from The Rolling Stones, Neil Young opened the second night Oct. 8, followed by a somewhat shortened McCartney set. 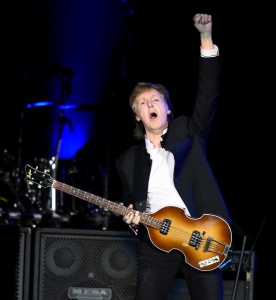 Macca welcomes the crowd of 75,000. (Kevin Mazur for Desert Trip)

Paul opened with “A Hard Day’s Night” and had the crowd screaming. The production utilized the 5-story-high video screens, featuring a wash of polka dots and pinwheels, and the crowd immediately reacted to the Beatlemania classic. The back screens, nearly two football fields wide, were even larger.

“Jet” was back in the second slot as a real plane flew high over the crowd and drones were a few feet over the pit and audience. Then more Beatlemania: “Can’t Buy Me Love,” with images of The Beatles floating behind the stage on the screen.

“Letting Go” was next, followed by “Day Tripper,” with geometric patterns all across the huge screens, followed by “Let Me Roll It,” with everyone’s hands in the air spinning in circles in the audience and a hot hot hot tribute to Hendrix coda.

Then “I’ve Got a Feeling,” with the huge backdrops a wall of throbbing pulsating speakers and a jamming ending to wind up the first act. 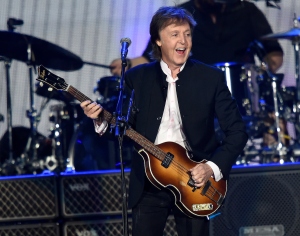 Paul next moved to piano for “My Valentine,” with the standard backdrop of the Johnny Depp video, followed by a rollicking “Nineteen Hundred and  Eighty-Five,” with the crowd clapping along. “Maybe I’m Amazed” was next and, as always, was the biggest challenge for his voice for the evening.

Back to center stage for “We Can Work It Out ,” with Paul’s voice still cracking a bit, then “In Spite of All the Danger,” with a sing-along reprise at the end and Paul telling the story of that being the first song The Quarry Men ever recorded.

“I’ve Just Seen a Face” was back in the set, replacing “You Won’t See Me.” “Love Me Do” followed with a nod to George Martin as Paul told the story of how the harmonica and vocals came to be. Then came “And I Love Her,” next with a 5-story Macca Wiggle shown on the side screens and close up. 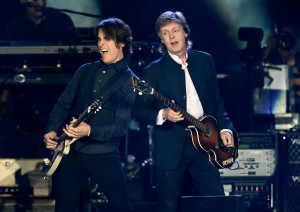 A touching “Blackbird” found the crowd as quiet and attentive as that many people can be, followed by “Here Today,” both delivered from high atop the rising platform.

The magic piano songs opened with “Queenie Eye” then right into “Lady Madonna” (skipping “New” and “Fool on the Hill”).

Back to acoustic guitar for the best ever version of “FourFive Seconds,” followed by “Eleanor Rigby,” with the screens showing classical music instruments and glowing scrolls of sheet music.

Next, Paul was back on bass guitar for “Being for the Benefit of Mr. Kite” as the psychedelic visuals and lasers filled the desert sky. 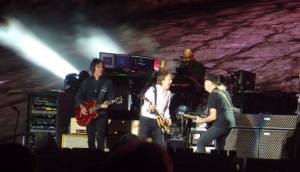 A special moment came next as Paul called Neil Young to the stage and the pair performed “A Day in the Life” with a “Give Peace a Chance” medley.

Then Paul said, “We’ve got something really special for you tonight and I’m going to ask Neil to play a solo in the middle.” At this point Neil broke into a wildly improvised solo, drawing a confused look from Paul. Paul then said, “I’d like that in the song, please.” He then counted off the rhythm by deadening the strings of his bass and the band kicked into “Why Don’t We Do It in the Road” for his first performance of this song live ever.

Then came the closing act of “Something,” “Ob-la-di, Ob-la-da,” “Band on the Run,” “Back in the USSR” and, on piano, “Let It Be,” followed by the hugest pyrotechnical display ever during “Live and Let Die.” Macca’s production team did an outstanding job adapting to a different sort of venue.

The set closed with “Hey Jude” and the gigantic sing-along from the crowd.

The band returned waving the California state flag as well as the U.S., U.K. and rainbow flags. Paul said since the Stones had done a Beatles song the previous night (“Come Together”), “We thought we’d do one of theirs tonight. John and I wrote this next song for The Rolling Stones way back in those early days and we’re going to do it for you tonight.” With that they broke into I Wanna Be Your Man” with a similar arrangement to the actual Beatles arrangement instead of the Bo Diddley-like version he performed in 1993.

Even though “Hi Hi Hi” and “Birthday” were listed on the set list, they were not done. After “Helter Skelter,” he went back to piano to perform the finale of the “Golden Slumbers/Carry That Weight/The End” medley with another huge fireworks display as the show ended.

Lots of fireworks and giant video screens were a feature of the outdoor show. (Rick Glover)

Many songs had fresh visuals on the screens, with “Maybe I’m Amazed” having more of Linda’s photos. “Queenie Eye” was different as well, and “Lady Madonna” featured an exotic dancer on the screen instead of the usual significant women in history. “A Day in the Life” brought back similar graphics from when this was in the regular set, with the swirling melting gardens that morphed into huge peace signs.

Three unique Desert Trip T-shirts were available, but no other programs or merchandise.

Paul was in very fine voice for most of the evening and very energetic throughout the show. He seemed to recognize he was bookended by The Rolling Stones and The Who and Roger Waters following the next night, and that apparently caused McCartney to take his game up to an A-plus plus level.

The festival was very well-organized for a massive event such as this. No problems at all getting into and around the venue; parking was the usual boondoggle leaving, but overall a wonderful show for sure.

(Click on any of the photos to see larger versions.)