Macca Needs to Open the Vault More for His Reissue Series

Posted on April 27, 2015 by beatlefanmagazine

Recent Paul McCartney reissues have been big on paper goods, but a bit shy on what fans really want: unreleased material from Macca’s legendary vaults. Reed Pitkunigis offers his thoughts on this issue, and you’re free to share yours, either via the comments below or by emailing BEATLEFAN LETTERS at goodypress@mindspring.com.

Most of my favorite albums from the late ’60s to early ’70s are getting the full-blown deluxe treatment these days. Wonderful multi-disc sets filled with tasty nuggets of demos and various mixes of the albums.

This brings me to the recent releases from Paul McCartney. I have all of his super deluxe edition releases and was really looking forward to “Venus and Mars” and “Wings at the Speed of Sound.” I was really hoping that His Nibs (oops, sorry, Sir Nibs) would open up the vaults and pleasure us with a vast assortment of demos and unreleased songs.

The door to this vault is open a crack, but we are still not allowed in. Let’s face it, casual fans of these albums could buy the $15 double-disc version and be very happy with them. The super deluxe editions are intended for hard core Macca-philes. While I love the paper goodies included in each set and the booklets, you know that once you glance at the paper stuff once or twice they wind up on a shelf alongside your other box sets and maybe you’ll look at them again years down the road.

The real selling point of these sets should be the audio and video content. Paul seems to think that by putting on B-sides and one or two demos, that we would be satisfied.

News flash … we are NOT.

“Wings at the Speed of Sound” reissue.

What put me over the edge on this matter was that, during the time of the release of these two new offerings, Paul put up free download demos online of some songs from the albums that do not appear in the new box sets.

Why not put them on the CDs in the box sets? It is obvious that the Macca vaults are full of these wonderful demos, and yet we are only getting to hear a couple of them. When other artists put out box set retrospectives, they include tons of demos to give the fan an idea of the way the album took shape in the early stages. Some sets even contain a complete CD with all of the album’s songs done in demo format.

Why can’t Paul do that?

These box sets should be knocking our socks off with rare content, and they don’t.

Another quibble I have: Why not put 5.1 surroundsound versions of the albums in with the sets? Home theaters are the rage these days and many audiophiles (myself included) have wonderful set-ups to really immerse yourself in surroundsound. You look at box sets out there from other artists and they generally throw in a 5.1 mix of the album on either SACD, DVD-Audio or Blu-ray Pure Audio.

Why has Paul not embraced this trend? If these new sets had a 5.1 mix, many would say it’s no-brainer to buy them. 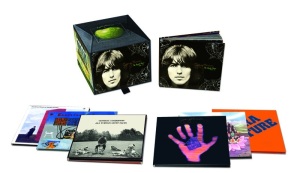 Dhani Harrison similarly dropped the ball with his father’s “Apple Years” set by not putting in anything mind-blowing, as was touched on by Brad Hundt and Rip Rense in Beatlefan #210; that is one box set I won’t be getting.

(On a sad side note, I left a polite remark on the George Harrison Facebook page about the lack of rare content on the set and they fixed it so that I could not leave any more comments.)

In summary, Paul has a chance with this reissue series to really put out definitive versions of his albums, which not only highlight the finished album, but also give us an insight into the making of the album. He has only partially succeeded.

Let’s hope that future releases address some of these issues. “Back to the Egg” should include all of the videos from the album PLUS the “Rockestra” set and perhaps a CD of a complete Wings show from the time period — not just a few songs from the concert.

Time to step up to the plate Sir Paul and put out a product that will be the measuring stick for all future box sets.