Posted on March 7, 2015 by beatlefanmagazine

Here, excerpted from Bill King’s latest Quick Cuts column, is an advance review of Ringo Starr’s “Postcards From Paradise,” which is due for release March 31: 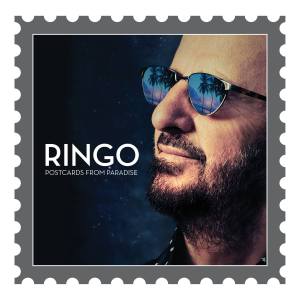 This latest collection of 11 songs, on which Ringo also has acted as producer, is a very pleasant and enjoyable fellow traveler with his two previous efforts, consisting largely of midtempo rockers that lyrically offer 12-step-worthy tidbits of Ringo’s upbeat philosophy on life, and musically feature some top-notch playing by the celebrated drummer and his friends — including Joe Walsh, Benmont Tench and Peter Frampton, plus his current All Starr Band members, including Steve Lukather and Todd Rundgren.

The thing I like about Ringo producing himself, as he’s done on his three most recent albums, is the organic feel of the recordings, which I find refreshing after years of former producer Mark Hudson’s catchy but sometimes cloying faux-Beatles pop. There’s a comfortable groove to these tracks that makes it sound as if the musicians had a lot of fun making the album.

The downside, though, is this album, like his other recent efforts, misses those earworm musical hooks that were Hudson’s trademark.

The album gets off to a strong start with the fourth installment of Ringo’s ongoing musical autobiography-in-song, a track called “Rory and the Hurricanes.” With its guitars and organ and prominent use of female backing vocalists, the number has a suitably early ’60s feel, as Ringo sings of visiting London with his old band. He namechecks the legendary Two i’s coffeebar and U.K. proto rock star Tommy Steele, but plays it coy when he notes that the next time he hit London, “I was with you know who.”

Also one of the album’s stronger efforts is the next track, “You Bring the Party Down,” on which Ringo appears to be making a sales pitch for clean-living to someone who is “still living off your memories of when you were in the band.” This one is notable for a taste of what sounds like sitar, and for a strong guitar solo.

The momentum falls off a bit with “Bridges,” which offers one of Ringo’s obvious metaphors for dealing with life’s choices (“crossing bridges is the best way to grow”). Not a great tune, but there’s some really stinging guitar work showcased in an extended solo.

Next up is the title track, which Universal sent out as an advance promotional digital “single.” Unfortunately, “Postcards From Paradise” is the album’s weakest song, a plodding rocker on which Ringo and his cohorts have created lyrics by stringing together lots of Beatles and solo Beatle song titles. An example: “And I ain’t going nowhere man / Because I want to hold your hand / It’s like I said the night before / I’ll love you when I’m 64.”

That tells you pretty much all you need to know about it.

(You can watch a “lyric video” for the song here. The video is a lot more clever than the song itself.)

The next chapter in Ringo’s musical testimony for a post-rehab life comes in “Right Side of the Road,” a lyrical cousin of “Bridges.” The musical backing is the highlight, with another extended guitar solo.

Next up are a pair of tracks that are among the album’s best, and it’s worth noting that on both of them Ringo departs a bit from his usual musical formula. “Not Looking Back” is a piano-driven ballad with strings on which Ringo sings about preferring to look forward. It has a nice violin solo. And “Bamboula” is a fun, moderately upbeat number about New Orleans, with some horns and accordion mixed in for Creole-Cajun flavor, along with very danceable percussion. (The title comes from the name of a type of bamboo drum that slaves brought over from Africa.) It’s good enough to make you overlook a few tortured rhymes in the lyrics.

The most notable aspect of the next track, “Island in the Sun,” is that it’s the first time Ringo has recorded with his current All Starr Band. Loping along to an almost-reggae beat and with some tropical-sounding percussion, it is enlivened mainly by its sax solo.

“Touch and Go” is a decent slice of neo mid-’60s rock. Better is “Confirmation,” a slightly upbeat, horn-backed love song about living life with no regrets. As Ringo sings (presumably to wife Barbara), “If I had known then what I know now / I’d do it all again with you anyhow.” He again makes nice use of his female backing vocalists on the title chorus.

The album concludes with “Let Love Lead,” which provides another summing up of Ringo’s philosophy: When in doubt … (see title). This one offers more tasty guitar licks in an extended instrumental portion that closes it out.

All in all, this album is goodtime, unchallenging listening that is no more musically relevant than what any other stars Ringo’s age are doing. But, if you’ve liked his music in the past, I think you’ll enjoy it.

(This review is adapted from one originally sent to Beatlefan/EXTRA! subscribers. For information on how you can receive Beatlefan/EXTRA! and be the first to read such exclusives, just email beatlefanmagazine@gmail.com.)